The rich history of Flushing

Although New York was first discovered in the mid-1500s, the Dutch first settled into New York as a colony within the early 1600s. New Nederland (as they called it) was a place for commercial enterprises, including pelt trapping. In 1624, New Amsterdam became a Dutch colony due to a famous trade between the settlers and the Native Americans on Manhattan. Shortly after a bloody war with the native Americans, the Dutch started encouraging settlers to go on the outskirts of New York as a means of protecting New Amsterdam from native Americans. This is how Flushing (Vlissingen in Dutch) gained its charter as a settlement.

Part of the Flushing charter ensured the right to freedom of religion, a rarity in the Netherlands at the time. This attracted many English Quakers to Flushing who were subject to persecution at home. Peter Stuyvesant eventually decided that Quakers would not be allowed within the colony, which resulted in John Bowne (a practicing English Quaker) being arrested and sent to Holland for trial.

Luckily, the charter saved him and religious tolerance was adapted as the standard by the Dutch in their other colonies. Many credit the Flushing Charter for the religious tolerance that became standard in the New World, which was often sought out by religious minorities who came to the new world to escape persecution. You can still see the Quaker Meeting House (still in use) and the historic John Bowne House in Flushing (call ahead for tours).

In 1662, Flushing became English after Suriname was traded in return for New York. (You can see one of the original English churches, which is still in use!) Flushing prospered as one of the first tree nurseries in North America, which can still be seen in Kissena Park. (It’s very easy to miss this if you’re not aware of the history as I only recently learned this fact despite being from Queens!) As Flushing grew, it became the modern-day borough of Queens.

READ MORE  How to buy cheap train tickets in the Netherlands

With the arrival of the IRT (New York Subway), Flushing became a residential neighborhood with commercial activity. This was once a Jewish and Italian neighborhood, but the 1970s brought a large community of Taiwanese and Korean immigrants. Immigration to Flushing from China made Flushing now one of the largest Chinatowns in the world. Flushing can feel quite crowded and chaotic, but there’s method in the madness. There’s nothing like strolling down Main St. while taking in the little stalls along the way!

Luckily despite the subway ride and the feeling that you’ve been transported to China, you do not need to speak Chinese to visit Flushing, but it definitely doesn’t hurt to visit with a native speaker of Chinese to ask about the house specials and order on your behalf. Sometimes there’s a secret menu. 😉

What to do in Flushing today

Flushing today is a magical place full of diversity, fantastic food, cool independent shops, and historic places worth visiting. If you’re lucky enough to be in town during Chinese New Year, it is a blast–and I always love watching the dragon dances! 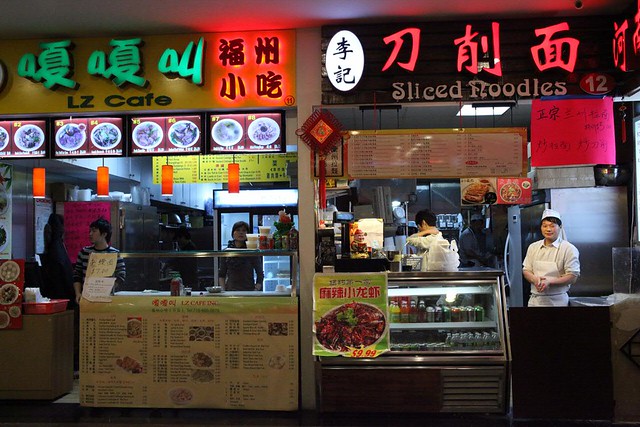 If you’re thinking about Chinese food, get General Tsao chicken out of your mind! One of the most special parts about Flushing is that you’ll find Chinese food from various provinces with restaurants that specialize in that province’s food only. You’ll also find the food of Chinese minorities, including Uyghurs! Of course, you’ll still find dim sum as well as bubble tea! Definitely come hungry! I recommend taking out cash as some small restaurants are still cash-only. The next section includes some food recommendations!

Belt out some tunes at KTV

I personally always love going for KTV with friends, which is great for those of us who are shy and bad singers. It’s always just fun to eat snacks (often included within the hourly price) and belt out your favorite songs! The hourly rates are generally cheaper on weekdays and during the day.

I love retracing the history of Flushing in person. This past trip was my first time within the John Bowne house, after checking the hours, and I was really impressed with the interior. You’ll see Dutch-era clogs and be transported back in time as you learn about the history of religious freedom in the United States. The tours are run by experienced volunteers. Tours are inexpensive and worth it!

READ MORE  20 Beautiful Streets in Amsterdam That You Must See

Where to eat in Flushing

This is far from a complete list on where to eat in Flushing. I tried to highlight some of my favorite restaurants in Flushing and well-known restaurants for different specialties.

Xian Famous Foods became famous thanks to Anthony Bourdain who visited this family-run business with a few locations. They specialize in food from the city of Xi’an in northwest China. Credit cards accepted. The restaurant is casual and a bit hard to spot, but hard to find a seat at times!

The most famous dish is the cold skin noodles made from wheat, which are the perfect blend of spicy (Sichuan pepper) and spices. It’s veggie friendly yet spicy although definitely a delicacy that you can’t find most places in the US. We also ordered various veggies, which were quite delicious! Just pick what you want based on the photos on the wall. 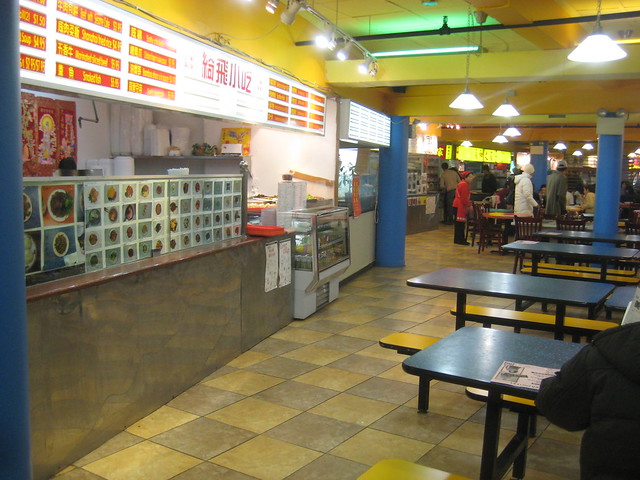 One of the best-kept secrets of Flushing is the Golden Shopping Mall. It’s easy to pass by this shopping mall and think there’s nothing for me here, but be sure to head into the basement for the food court. This is where Anthony Bourdain came when he visited Flushing and I recommend bringing cash with you. You’ll find ten stalls with food from all over China and just ask what’s good. If you’re in for a bit of a foodie adventure, you need to come here! 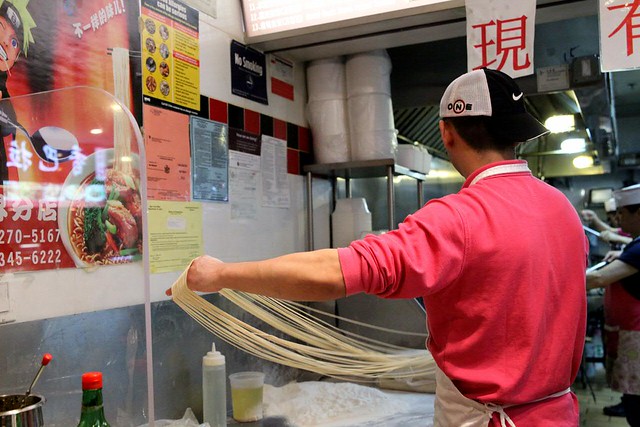 A newer addition to Flushing is New World Mall, which is the largest Asian mall in the Northeast. The basement food court is full of goodies on a budget, perfect for those looking to expand their food horizons. You’ll find a lot of stalls here and they change frequently as some successful stalls get their own restaurant after a while in the food court. Bring cash–and your appetite! 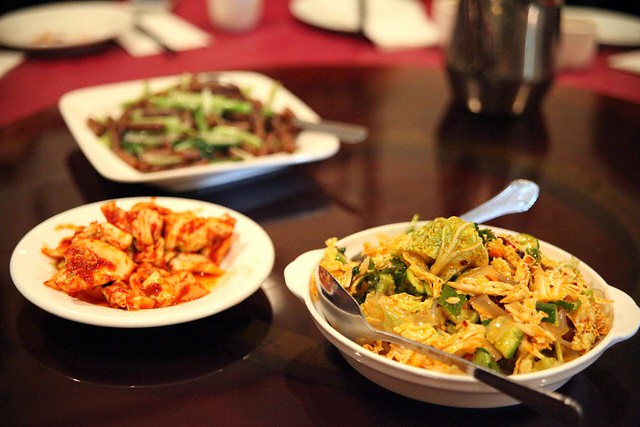 I love Fu Run. This no-frills Northeastern Chinese restaurant is definitely an experience for those who haven’t been to Flushing before. Here, you’ll find food from one of the provinces of China (Dongbei) near the Korean border, which means you’ll be served kimchi. The portions are always family-sized, so don’t let your eyes get bigger than your stomach.

I personally love the Country Style Green Bean Jelly Sheet as an appetizer before getting one of the mains to share when visiting with family or friends. Some of the dishes sound a bit intimidating, but I haven’t had a dish that I haven’t liked here. You’ll find quite a few great vegetarian options here although the fish in hot bean paste is what I recommend ordering if you eat fish.

Hotpot is a Chinese classic dish where you’re given a delicious broth and then order all the extra ingredients that you want to put inside. At Liuyishou, one of the best known hot pot restaurants in Flushing, you can order meat, seafood, or vegetables to put into your hot pot, which can be shared with a group (as long as you all agree on the ingredients!) 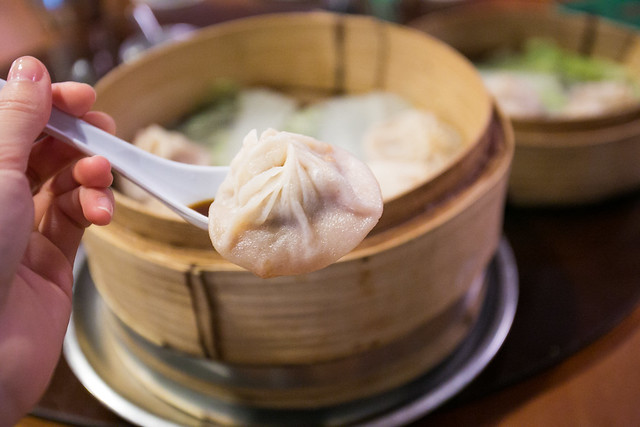 One of the most famous restaurants in Flushing is Joe’s Shanghai. This restaurant specializes in Shanghai food, specifically steamed buns with soup within the dumplings. This food can be tricky to eat, but it’s worth the struggle. Be sure to get here early if you’re coming here on a weekend as it can get quite busy!

Bubble tea is a popular drink that came from Taiwan. The idea behind it is that you order a tea made with green or black tea (it can be mixed with milk). Then, bubbles made of tapioca or jelly are added to the drink. You’ll sip these out of your cup with a straw. It’s a very refreshing (and often cold) drink on a warm day. I personally love popping flavored bobba if I have the option! The best two places for bubble tea are Gong Cha and Vivi Bubble Tea. Both accept credit cards.

I love Chinese desserts and I don’t understand why they’re not more famous. One of my things to order at a Chinese bakery (if I see it) is the matcha green tea cake roll, which are often sold by the slice with a bit of cream at some Chinese bakeries. You’ll also find red bean desserts within a satisfyingly crunchy exterior. I always go to Tai Pan Bakery, but you’ll also find lots of other bakeries in the area!

How to get to Flushing

Flushing lays at the end of the 7 train line. If you’re coming from Manhattan, I strongly recommend ensuring that you hop on the express train, which has far fewer stops and tends to be less crowded. (Click for more tips for taking the NYC subway here.) You’ll also find many buses within Queens that head to Flushing.

Flushing is pretty close to LaGuardia airport, so if you have a later flight out of LaGuardia, I strongly recommend bringing your stuff with you and getting a great meal in Flushing before leaving. A taxi would be best as the public transit route can take about 30 minutes with a transfer, not including traffic, but it’s only about 15 minutes by car without traffic.

If you’re coming from Long Island, you can take the LIRR here from Penn Station, Citi Field (Mets-Willet Point stop), or further out on Long Island (Port Washington). Traffic can be frustrating and I’d encourage you to leave your car at home. Finding parking is always miserable and even if you find a great spot, it’s likely with metered parking.

Have you been to Flushing, Queens?