You are here: Home / Travel / Europe / The Netherlands / The 10 best Dutch cheeses to try in Amsterdam by a Dutch resident

The Netherlands is one of the biggest dairy producers in the world and not surprisingly, cheese (known as kaas) is a highlight for the Dutch economy as well as many visitors. This article will focus on the ten best Dutch cheeses in the Netherlands to try written by residents of the Netherlands with tips on finding authentic cheese shops.

Skip Henri Willig or Old Amsterdam or Cheese & More in favor of a local cheese shop as many large commercial “cheese shops” catered to tourists have a very limited selection. There are enough stores in every Dutch city where you can sample and buy many sorts of Dutch cheeses, which are generally referred to as “.”

You can search on Google Maps for “” near your location or simply ask at tourist information for their favorite cheese shops. You’ll typically find the best and most reasonable shops within residential neighborhoods! In Amsterdam, I recommend the cheese shops De Kaaskamer in the 9 Streets neighborhood of Amsterdam and Kaasland Haarlemmerdijk. There are typically a few cheese stalls within local markets, such as the Albert Cupymarkt in Amsterdam.

Be sure to bring a couple of euros in cash in case the shop does not accept foreign cards. Most are happy to seal your cheese for travel (possibly for a euro extra), which means that you don’t need to worry about your cheese coming home with you! A pro tip: most serve sandwiches around lunch-time with the cheese of your choice for a couple of euros.

Gouda cheese has been described as the ‘King’ of Dutch cheeses. It is a semi-hard cheese with a 48% milk fat content, which will be stated as a number on the cheese. (If you pronounce Gouda, try to do a g-ch sound in the beginning with the G as some Dutch may not be used to the English pronunciation of Gouda.)

Jonge kaas is Gouda cheese that has been matured only four weeks. It’s still pretty soft at this stage and it is the favorite of Wanderlustingk editor Karen. (It has a small amount of lactose, perfect for those who have issues with high lactose cheeses!) Belegen is another young Gouda cheese that has been aged two months although extra belegen is good for those who prefer a slightly older cheese.

You can pair older Gouda with fruit or wine although younger Gouda cheese is a favorite on sandwiches. Reypenaer and Old Amsterdam (which isn’t produced in Amsterdam!) are popular brands. It is easy to find Gouda cheese at supermarkets and cheese shops throughout the Netherlands although it’s best to sample the various varieties with a knowledgable cheese shop employee who is eager to give out samples! Click for my day trip guide to Gouda!

Throughout the summer, you can visit the small town of Woerden, close to Gouda, to experience a traditional cheese market in the Netherlands. Many cities simply have reenactments, although Woerden holds a real cheese market where farmers and sellers negotiate the price. The large cheese wheels are stacked on the ground by farmers and sold in the traditional way via the hand-clap method. 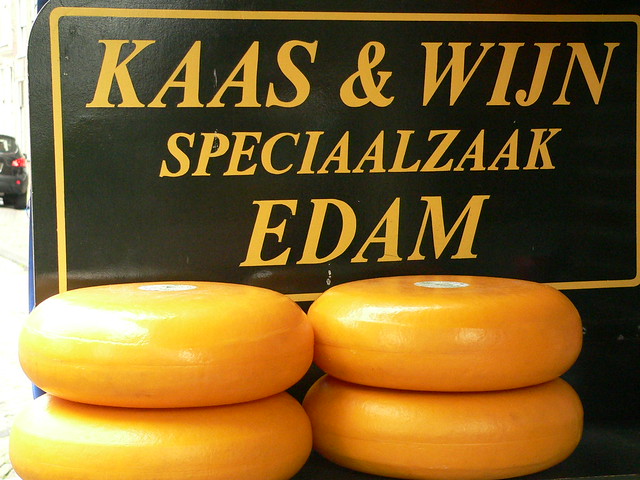 Edam cheese is a semi-hard cheese with a fat percentage of 40%. Named for the township where it originated in North Holland, Edam cheese has a salty but mellow flavor. This hardens and intensifies with maturation, similar to Gouda cheese.

Typically, Edam cheese is produced in a spherical shape with flattened sides and coated in yellow or red wax. Edam pairs well with fruit like apricots when it is young and apples or pears as it ages.  You can easily visit Edam from Amsterdam.

Leideskaas (Leidse cheese) is a very different and interesting cheese to try that is sometimes referred to as (a generic term describing cheese with cumin) It is similar to Gouda, however, has cumin seeds added to the curd prior to pressing giving it a unique flavor. Leisekaas is crumblier and saltier than Gouda.

Leidsekaas gets its name from Leiden, the beautiful city known for its university about thirty minutes from Amsterdam. It is generally aged for at least 6 months whilst the flavor of the cumin intensifies over time. It is a protected Dutch cheese in terms of location and processing, so if you take a day trip to Leiden, be sure to step into one of the cheese shops (such as Kaasspeciaalzaak van ) for a sample.

Massdammer is the Dutch take on swiss-cheese, featuring the distinctive holes you would expect. The domed shape, large holes, sweet, nutty flavor are caused by the release of gas produced by special bacteria used during the maturation process. It is similar in taste to Swiss Emmental, but softer due to moisture content. This is a relatively young cheese of the Netherlands, with its introduction beginning in the . The most well-known brands of Massdammer cheese are Leerdammer and Massdam.

READ MORE  Insider's Guide to Singapore On a Budget: Your complete guide to cheap Singapore

or goat cheese is available in soft and semi-hard varieties. Think of a soft, pale and creamy cheese with a slightly sharp taste. Spread it on soft warm bread or crumble over a salad for a melt-in-your-mouth experience.

Goat cheese requires a shorter maturation process and the different areas in the Netherlands boast their own take on Geitenkaas. Varieties goat cheese with paprika, herbs, tomato, seeds, smoked and even those with stinging nettles. For a harder aged goat cheese with caramel undertones, try the .

Schapenkaas is a cheese made from sheep milk. Most sheep milk cheeses that you’ll find in shops are imported from other European countries. One specific Dutch cheese made from sheep milk is the Texelse schapenkaas, which originates on the charming Wadden island of Texel (known for the Texel sheep!) For a truly unique experience, take a weekend in Texel to taste this delicate cheese at one of the few farm-to-table restaurants in Texel.

One of my favorite kinds of Dutch cheeses to introduce guests to is Boerenkaas. The name means farmer’s cheese and it is simply handmade cheese (from various animals) that is produced on a farm by a farmer who is using raw milk from his or her cows. The cheese can vary in taste due to the cows or farm itself as well as spices/herbs added to the cheese. Simply, it is not mass produced cheese, which is why I recommend seeking it out.

You can typically find at smaller markets in many Dutch cities as well as within cheese shops. It’s my go-to purchase (when I buy cheese) as I believe it tastes richer and better than most other cheeses. It will vary a lot on the farmer and the cheese itself, but it’s definitely worth a try! In theory, boerenkaas can be Gouda as well as other sorts of Dutch cheeses, but the cheese must follow the requirements in terms of where the farm is located and the required process for that cheese.

Graskaas is a kind of made from the first milkings of cows once they have returned to the fields after spending winter inside. The cheese is typically sold in early summer, so be sure to seek it out at a cheese shop near you if you’ll be visiting in May or June. It has a mild yet rich taste.

Beemsterkaas is a cheese that originates in North Holland. Although the region that produces it isn’t as famous as Gouda, Beemster cheese is particularly well-known around the world. The cheese is produced a bit southeast of Alkmaar within the Beemster Polder.

The cheese itself is made in a similar way to Gouda, but it is not Gouda. It has a distinctive taste due to its unique soil: clay from dried up sea water. The rest of the cheese is produced by hand. The cheese farmers have formed a collective to ensure a good price for the cheese and it is easy to find in supermarkets/cheese shops.

One of the unique cheeses from South Holland is the Delfts Blauw cheese. This sweet and creamy cheese has a distinctive blue vein, which has been compared in color to the famous Delft pottery. You can typically find it at nicer supermarkets as well as cheese shops. I recommend the Kaas & Wijn shop in Delft if you want to buy it while visiting Delft!

I introduced to my cousin. This smokey Dutch cheese can be easily mistaken for a sausage and it often has little bacon bits inside of it for added flavor. I would not recommend this one to vegetarians as a result It pairs perfectly with sausage!

You’ll find many more within the Netherlands, so don’t be afraid to step into an authentic cheese shop for a tasting during your visit to the Netherlands. Samples are generally free and sure to bring a few euros in case you’re unable to pay with a foreign card! As the Dutch say: Eet ! (Bon Appetit!)

Previous Post: « Amsterdam in May: Weather, Events, and tips by a former resident
Next Post: Secrets of the Red Light District in Amsterdam: Etiquette and Hidden Gems of De Wallen »