You are here: Home / Travel / North America / Canada / The best things to do on Prince Edward Island for first-time visitors

Having returned from Prince Edward Island where visitors can look for wild foxes, drink tea or coffee out of jars, drive an 8-mile span bridge that is Canada’s longest, meet spoon musicians, and eat local seafood. Many cruise ship visitors visit briefly during a shore excursion and miss many of these amazing things to do in Prince Edward Island. I hope that this article inspires you to spend more time on Prince Edward Island!

Prince Edward Island is the smallest Canadian province in terms of both size and population. Whether you are visiting Cavendish National Park to experience it’s natural beauty or meeting locals in small fishing villages, you will fall in love with PEI island!

One experience in PEI that can not be easily duplicated is looking for the many wild foxes and their dens. PEI was once the fox capital of Canada.  Fortunately, hunting for foxes and their furs is illegal today so they thrive everywhere, including within the capital, Charlottetown.

Park Rangers told us where they normally congregate although I wasn’t lucky enough to see one for myself. Nevertheless, it was still fun looking for the foxes and a chance to explore the island. If you encounter one, do NOT feed them or get close. Foxes are not a danger to humans, but interaction with them is not recommended.

While Charlottetown is the capital of PEI, its year-round population is only approximately 40,000. However, the number of PEI visitors exceed 1,000,000 annually. Despite the crowds, Charlottetown has a lot of charm to offer.  While in Charlottetown, we highly recommend visiting Victoria Park. It is a great park in the middle of the city next to the harbor. We loved walking along the seaport on the boardwalk.

Victoria Row is a picturesque pedestrian street in downtown Charlottetown where many restaurants are located.  There is a great choice of cuisine from seafood to Asian. There is continuous music in the summers since live jazz bands perform throughout the evenings. It is worthwhile to come to Victoria Row just listen to the performers. Elsewhere in downtown, the Confederation Center for the Arts has a museum, theatre, art galleries, and other cultural activities.

Leave the capital and head to the north shore.  I highly recommend Cavendish Beach that is part of the National Park. While there, be sure to hike the Dunes Trail via the boardwalk. The path, an easy stroll, is just over 1 mile and showcases many natural plants from PEI.  The Gulf of St. Lawrence water is warmed by the Gulf Stream coming from the south, so the water was surprisingly warm in the summer.

Another great beach is Brackley. It is a short drive from Cavendish. All beaches on the North shore have amazing red cliffs and red sand.  Close to both beaches is Chez Yvonne. It is a family-run restaurant where the food was fabulous and fairly priced. 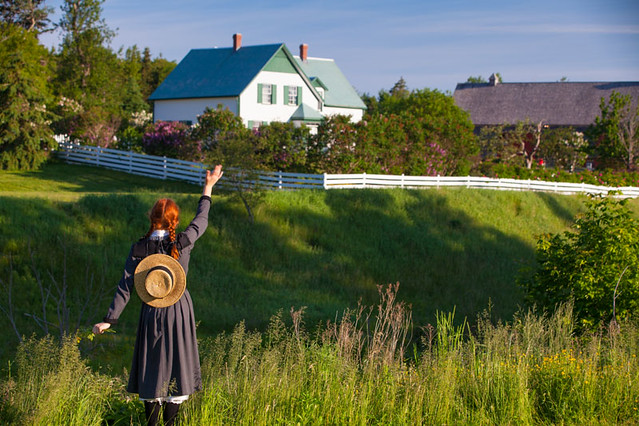 While in the North Shore, be sure to visit the Green Gables Heritage House that is part of the Canadian National Park system. This house is the site of relatives of the Lucy Maud Montgomery, author of Anne of Green Gables.  It was fascinating seeing how this woman wrote numerous books about life in Prince Edward Island in the early 20th century. L.M.

Montgomery is an inspiration as she overcame numerous rejections from publishers.  More than 50 million books of hers have been sold today. The Green Gables house shows how locals lived on PEI over a hundred years ago. Whether you are a fan of the book, you cannot leave the Green Gables house off your list of things to see on PEI island.

I didn’t intend to visit North Rustico, but I absolutely loved visiting this beautiful area of Prince Edward Island.  It is close to Brackley Beach.  While in North Rustico, we listened to a local, Brendan, who performs music with spoons. This technique is an Arcadian and PEI tradition. Keep an eye out for him! He was kind enough to let me try it playing with his spoons and found it very difficult!

When in North Rustico, stop by the Lighthouse Café for delicious tea, coffee, and snacks. The café is run by two sisters that serve fresh local foods.  The café overlooks the lighthouse and beach. At Outside Expeditions, there are many rentals including bikes, kayaks, and other paddling trips in the Gulf.  They also sell kites on the second floor. I strongly recommend spending more time in this town to go kayaking, go to the beach, or go on a boat tour with the lobster boats.

Throughout the island, there are many signs announcing ceilidhs (pronounced kal-lee) held in churches, schools, bars, and other public assembly spaces.  These are traditional musical performances where traditional songs are performed together with traditional dances. This is one of my favorite experiences on Prince Edward Island. (You can also watch ceilidhs in Nova Scotia!)

While on PEI, be sure to try their local potatoes.  PEI grows 25% of all potatoes eaten in Canada. In the summertime, many farmers have signs for New Crop. Try one as they are delicious. PEI grows four types of potatoes: russet, white, red, and yellow. You can find them served at many cafes!

Getting to Prince Edward Island is also fun. I drove over the Borden-Carleton Bridge as it is the fastest way of entering the island from New Brunswick. The bridge was built in 1997 and cost over one billion dollars. Previously, the only way to coming or going was by Ferry. Ferry service is provided by Northumberland Ferries and leave from Nova Scotia and New Brunswick. Several locals prefer the ferries as it offers a relaxing boat trip but costs substantially more than driving over the bridge.

If you take the bridge, a great stop off is Victoria for its old-time town flavor, beach, and great restaurants.  Naturally, there is great seafood served in this town. I really enjoyed the Landmark Oyster House for the seafood, a must for those visiting PEI.  Another favorite is the Lobster Barn that many locals swear has the best seafood on PEI. You will not be disappointed!

Have you been to Prince Edward Island? Let us know your favorite highlights!

New Yorker–born and raised. Lover of tennis. Curious. Frugal and independent traveler who believes that travel yields an understanding of different cultures. 10% of the magic behind Wanderlustingk.