I spent a couple of years living in the Queen City (Buffalo, NY).  A lot of people aren’t impressed by Buffalo at first and that’s because Buffalo is the kind of city that you need to take the time to explore by car.  Sometimes you feel like a detective standing in a strip-mall parking asking yourself if this really the amazing donut shop that you heard about.

That’s the thing: Buffalo is about the people and the food. You need to talk to locals about where to eat in Buffalo as the food is spread out all over the city and luckily, I have some friends who have been keen to introduce me to the best places to eat in Buffalo, New York.

This is not so much a guide to “fancy” restaurants or the newest restaurants, but a guide to the classic food in Buffalo that you’ll want to try along with some affordable yet delicious restaurants in Buffalo. I promise that there’s some vegetarian options here. Map at the bottom. 🙂

Unless you’re vegetarian, how can you go to Buffalo and NOT eat Buffalo wings?  There’s two famous places to eat Buffalo wings in Buffalo: Duff’s and the Anchor Bar.    Even if you don’t eat meat, both bars have some vegetarian snacks to eat, such as jalapeno balls and mozzarella sticks.  My friend also recommends 911 Tavern for wings.

Duff’s is generally the local favorite for where to eat Buffalo Wings in Buffalo as well as my personal favorite although getting out to Duff’s can be harder without a car. It’s possible via public transport.

Their hot sauces come from non-spicy to “Death Sauce.” (A couple of friends would often order this as a challenge and it never ended well. They truly mean that it’s SPICY and you’ll be really struggling after one wing.)

The Amherst location is the first location of Duff’s and I recommend dining-in as they have some really good deals that include a drink if you can get a seat.  I personally prefer the boneless wings as I feel you get more value for your money. (3651 Sheridan Drive) 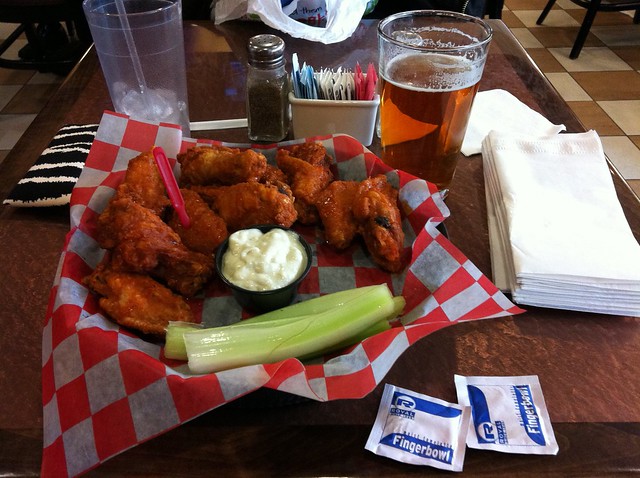 The main location is pretty convenient, close to downtown Buffalo, which makes the Anchor Bar a better place to get Buffalo wings if you’re in Buffalo without a car.  I think that it’s best to try both Anchor Bar and Duff’s to see which one you prefer more. 🙂

Click for a complete guide to things to do in Buffalo, NY 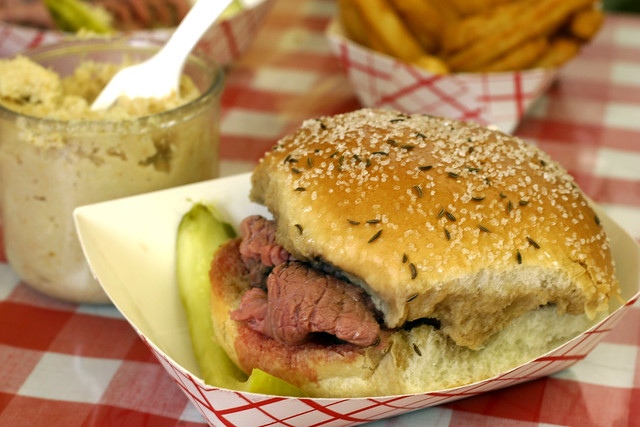 Beef on weck is a typical dish from Western New York that is said to be invented by a German immigrant to Buffalo in the mid-1800s.

The kimmelweck roll is supposedly inspired by a bread baked as part of a special offering to the dead made with salt and caraway seeds.  On the sandwich, you’ll find thin-cut beef cooked to perfection and horseradish. It’s a unique and filling meal that is very salty.

You can visit Charlie the Butcher for trying out beef on weck in Buffalo. You can also find it at Anderson’s (below).

Ted’s is part of many childhood memories of many Buffalonians, including one of my closest friends.  They’re famous for their charcoal grilled hot dogs that are crispy and delicious.  The footlong is a challenge, but if you’re hungry, go for it.  Their shakes and onion rings are tasty.

My husband likes to joke that I could eat a sandwich for every meal for the rest of my life.  He’s correct if it’s from Dibella’s and you’re likely to feel the same after having an old-fashioned sub at Dibella’s.  You might think you know submarine sandwiches, but Subway is a joke compared to the real thing.

Dibella’s was founded by Italian immigrants in Rochester who were importing ingredients from Italy prior to getting into the sandwich making business.  This family-run business prides itself on fresh bread made twice daily. I’m biased in saying that the everything bread is the best one, but it is. They have veggie options as well as meat options (the Godfather is delicious).

Be sure to get Dibella’s Oil Dressing on it as well as hot peppers.  My other favorite part of the meal is the gooey homemade chocolate chips that you’ll find near the cashier.

Frozen custard is not necessarily unique to Western New York, however Anderson’s is really good at it.  If you’ve never had frozen custard before, it’s thicker, creamier, and richer than other ice cream.  In addition to custard, they have standard food as well as beef on weck. 🙂

I’m obsessed with the red velvet donuts at Paula’s.  Even my husband, who doesn’t enjoy sweets, had to admit that they are really good.  This local Buffalo institution has moved a couple times, however don’t be alarmed by one of its locations in an average looking strip mall.

They run out of their donuts fairly quickly, so you should get there as early as possible. There’s a significant line in the morning and they often have a deal where you can get a coffee with your donut.  I often get two, just in case I get hungry later. 😉  Paula’s has a couple locations around Buffalo.

Bear with me here, but as a native New Yorker, I’m picky about my pizza.   However, the style of pizza in Buffalo is a bit different with a thicker cut than my beloved NY pizza. You should call it “sheet pizza” due to its shape.

I really like Bocce Club or La Nova (original location only) for their thick crust pizza with pepperoni although I still find it weird to have a large pizza in a square shape.  I also like having Buffalo chicken on my pizza, which is a common request given that most pizza places in Buffalo do wings and pizza.  The combination of the two is magical, so trust me on this.

Parkside Candy is one of the most famous candy shops in Buffalo.  This old-fashioned candy maker with a gorgeous vintage exterior has a really great variety of sweets and I love stopping in here for some candy.

Other good places to eat in Buffalo

Chef’s is a Buffalo classic restaurant that everyone visiting Buffalo should try. It was founded by Italian immigrants.  The most famous dish is the spaghetti parmesan, which is basically two meals in one dish.  Their portions are heaping and the atmosphere is part of the appeal.  It’s American Italian food at its best. 😉

Most people only head to Pearl Street Brewery for the beer, but I really love Pearl Street’s affordable and tasty food. The atmosphere as well as affordable prices mean that you can sit for hours sipping on a beer as well as eating a really good meal.  I recommend sticking to the original location downtown, rather than the second branch.

This Western New York chain from Syracuse has some great barbeque.  People don’t usually associate New York with barbeque, but Dinosaur Bar-B-Que is good proof that there is decent barbeque in the North too.

ETS is a favorite of Buffalonians and perfect for anyone eating in Buffalo on a budget. Elmwood Tacos and Subs (usually called ETS) is located in the heart of Elmwood village and it’s a cult classic. Their subs are good and their tacos are Buffalo’s own take on tex-mex.  It’s delicious and cheap. The fish taco is good, but it’s hard to go wrong here.

Who doesn’t love Wegmans? This Western New York supermarket is still one of my favorite supermarkets, even after moving to Europe.  Their local brand is just so delicious and the allergy-friendly buffet is part of the appeal.

If you don’t have time to drive out to Dibella’s, be sure to pick up a sandwich and a chocolate chip cookie at Wegman’s.  The beer selection is also fantastic.  There’s a large restaurant area that gets crowded around lunch/dinner.  Some branches are 24 hours, however the sandwich shop is only open during specific times.

They have a really good philly cheese-steak on a hoagie.  On a night out, you’re likely to see a massive line at Jim’s as their food is really satisfying after a night out.

I personally love their chicken finger sub made with hot sauce. It can be greasy, but that’s part of the appeal. They have chains all over Buffalo, so you’ll find a Jim’s near you!

You’re probably wondering what a garbage plate is.  This Western New York classic, originally from Rochester, is a late night classic and the kind of food that you’ll need after a lot of really good craft beer in Buffalo.  It was created by a Greek immigrant who who combined unsmoked sausage and potatoes.

However, the garbage plate is far more than that. It’s usually a combination every food in the kitchen, including hamburgers, onions, mac salad, ketchup, mustard, sauce, and (sometimes) chicken fingers.  It’s one of those dishes that you really hate or love and it’s best eaten after a night out. Try Greek To Me Restaurant in Tonawanda as my go-to place closed.

This vegetarian restaurant close to UB serves up some of the tastiest vegetarian food that you can find with fantastic prices. If you have a couple of friends who aren’t sure about going vegetarian, be sure to bring them to Amy’s.  I particularly love their brunch and their hummus.  (This is on my healthier days.)

This restaurant that caters well to chocoholics has everything from chocolate pasta to chocolate fondue to chocolate cocktails.  It’s what I dream of although be warned that it can be really busy on weekends, so try to make a reservation ahead if you want to go for dinner (or drinks!) 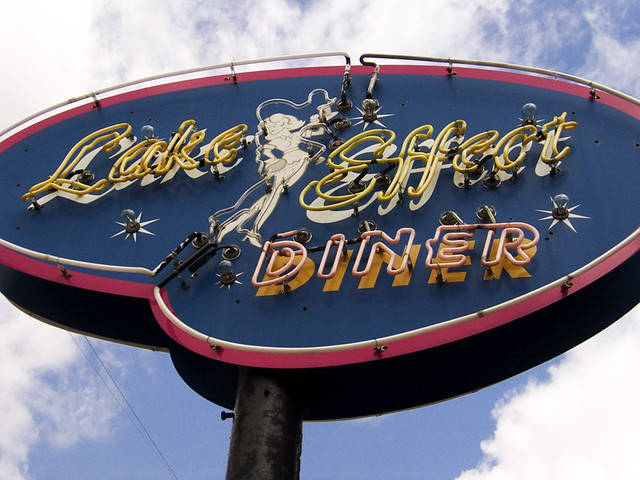 This Buffalo classic, also close to UB, has those old-school ’50s vibes.  Their milkshakes are why they’re famous.  I can’t resist the Oreo milkshake.  If you’re looking for a kitschy place to have a date, you need to come here prior to walking to Parkside Candy.

READ MORE  Amsterdam on a budget: Insider tips for the Netherlands on a budget

More information to be added about:

Your map of the best places to eat in Buffalo

Click for a downloadable map with all of these Buffalo food recommendations.

I’m sorely missing the incredible food that the Queen City has to offer, so please eat as many of these foods as you can during your trip to Buffalo.  Buffalove. ❤

Have you been to Buffalo? Any places to eat in Buffalo that I missed?

Previous Post: « One day in Haarlem: A perfect itinerary of things to do in Haarlem
Next Post: What nobody tells you about being a digital nomad »