You are here: Home / Travel / North America / Canada / The 20+ best things to do in Toronto for first-timers

The city of Toronto is the largest city in Canada. From adventure to nature and history, Toronto has a lot to offer to the visitors. To fully experience the best of the city, this guide to Toronto will walk you through all the best things to do in Toronto!

No trip to Toronto is complete without a visit to the most iconic landmark of the city – the CN tower! The tower is 553.3 m-high and adds a unique look to the skyline of Toronto. It was built in 1975. It was the tallest building in the world in 2007, but later lost the title to Burj Khalifa in 2008.

Apart from just admiring it (without paying to go up!), there is plenty much to do at the CN Tower. You can have a complete panoramic view of the city, dine at the revolving restaurant, and walk over the edge of the tower… 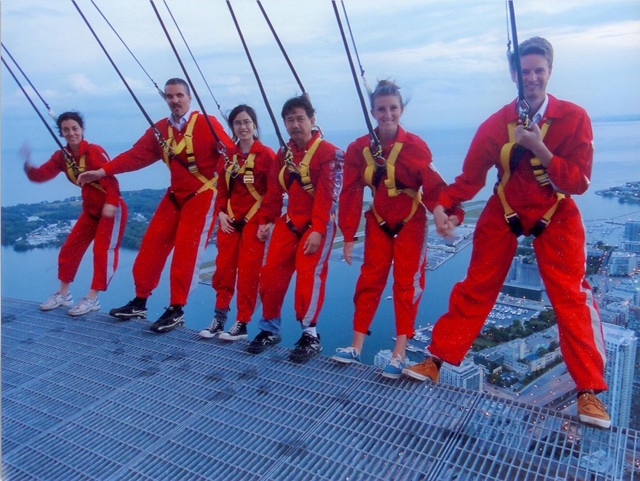 One of the most popular activities in Toronto for dare devils is the Edge Walk at the CN Tower, which is not for the faint-hearted. The first of its kind in North America, Edge Walk is a free walk on a 5 feet wide ledge. The ledge goes around in a circle at the top of the CN tower, which is 1168 feet above the ground! It is not for the faint-hearted!

The thriller here is to lean back towards the ground facing your fear of heights and pushing your limits. Apart from the adventure, Edge Walk gives great panoramic views over Toronto. Ontario lake can be seen clearly at a distance from the Edge Walk just across the concrete jungle of downtown Toronto. 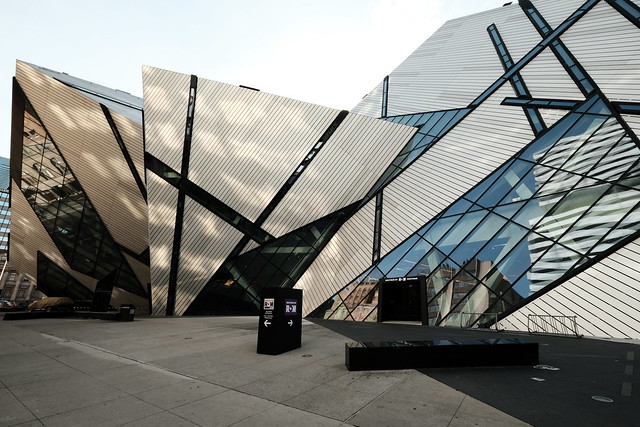 There are many museums to visit in Toronto, but the Royal Ontario Museum is the best of Toronto’s museums! It is the largest museum in Canada with more than 30 different galleries. The most prominent things on display at the Royal Ontario Museum include Chinese architecture, Roman artifacts, and Egyptian archeological findings. The museum is also a research and conservation center which works towards preserving the unique artifacts and archeological remains displayed in the museum. For the book lovers, there is an in-house library too!

Click to buy skip-the-line tickets, a must with popular temporary exhibitions!

You do not often come across a castle in the middle of a city in North America! Luckily, this is possible in Toronto. The Casa Loma palace was built in 1911 by Sir Henry Pellatt as his residence. The property is huge and luxurious with 98 rooms spread over 64,700 square feet. A visit to Casa Loma will take you back in time.

Casa Loma is also popular among many tourists due to the fact that many Hollywood movies were shot here. There are horse stables and beautiful gardens surrounding it from all sides. A tour to Casa Loma includes a walkthrough across many suites in the castle, the garden, and many verandas.

Canada is famous for hockey for a reason! Sports fans are in for a treat at the Hockey Hall of Fame where they can behold the world’s largest hockey memorabilia. The hall of fame also has the Stanley Cup on display – however, its availability is subject to the cup tour across Canada.

With so much diversity in the city, Toronto is becoming the food capital of Canada with a fusion of Indian, Caribbean, Middle Eastern, and North American flavors.

Voted as the best food market in the world by National Geographic, the St. Lawrence Market is a must-see in Toronto. It is the largest market in Toronto which houses more than 120 food vendors who sell everything from seafood, dairy, baked food, and fresh produce! The market is divided into two sections – the North Market and the South Market. All sorts of food items are sold at the South market, however, during Saturday afternoons; there is a Farmer’s Market in the North building.

There are several food tours in Toronto, many of whom will take you through the St. Lawrence Market sampling the best that Canada has to offer. (Indian cuisine is popular in Toronto!)

A visit to the Distillery District is one of the best things to do in Toronto. The historic district has buildings dates back to the Victorian era. It’s full of stunning cobblestoned alleys, cute cafes, and craft beer pubs. One can spend easily a half-day or even a full day just by walking around exploring the Distillery District.

The district also happens to be a creative center for the artists of Toronto. Local artists gather to hear and conduct self-funded art workshops, wall painting sessions, and music shows as well. To learn more about his part of Toronto, opt for a walking tour of the Distillery District!

The Edwards garden is a beautiful botanical garden in the heart of the city. This beautiful lush green space lies just adjacent to the Toronto Botanical Garden. It offers plenty of greenery for visitors to enjoy. People love to come here to unwind from the hustle-bustle of the city and spend some time in peace by walking across the garden or reading a book in silence. The garden is open 365 days and it is free to enter. 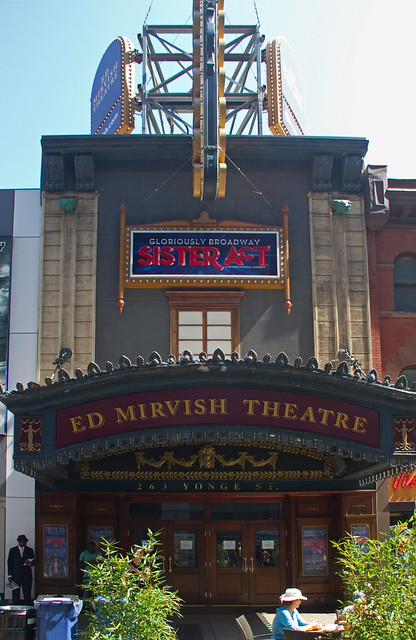 All the art and movie lovers are in for a treat here! The Ed Mirvish Theatre is a historic movie and plays theatre in Toronto and it is one of its kinds in the city, which makes a visit to the theatre an unmissable thing to do in Toronto. It is named after a wealthy businessman of Toronto after its name was changed twice earlier. There are four theatres inside the lavish building with grand décor that enhances the overall experience of watching a live play at the theatre.

Queen Street is the trendiest shopping district of Toronto also known as the Art and Design district among the locals. If you are someone who likes to keep your fashion game strong while traveling, you must come to Queen Street! If you’re not a big shopper, you’ll find great food and live music here. 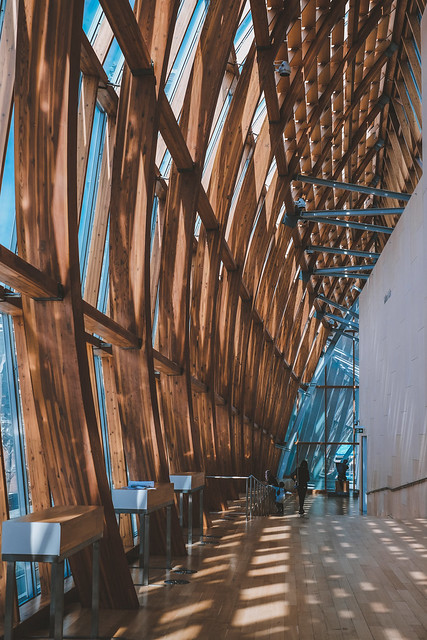 One of the largest museums in North America, the Art Gallery Ontario never fails to impress whether visiting it for any special exhibition or just a casual visit to the museum. The art gallery houses more than 90,000 artworks by different artists from all over the world. 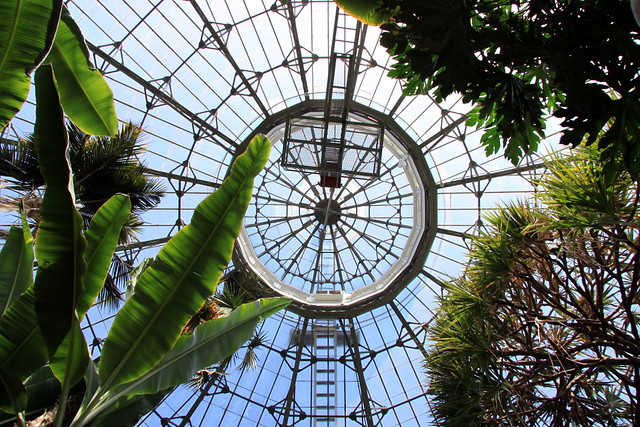 Located in the center of downtown Toronto, Allan Garden Conservatory is home to different species of plants and flowers which are brought here from all around the world. This conservatory was made to offer a home to the wild plants and different species of flowers which cannot easily sustain the harsh winters of Canada. The locals love to visit the conservatory during the cold months of the year, which is temperature-controlled and feels like mild summer even if it is snowing outside!

There are six different greenhouses in the conservatory which are spread over a distance of more than 16,000 feet. Each greenhouse homes different plants depending on the temperature conditions that are essential for the growth of the plants. There are tropical houses in the conservatory, where you can find colorful and vibrant orchids bromeliads and begonias. Allan Garden Conservatory is open for the public 365 days around the year and it is free to enter. 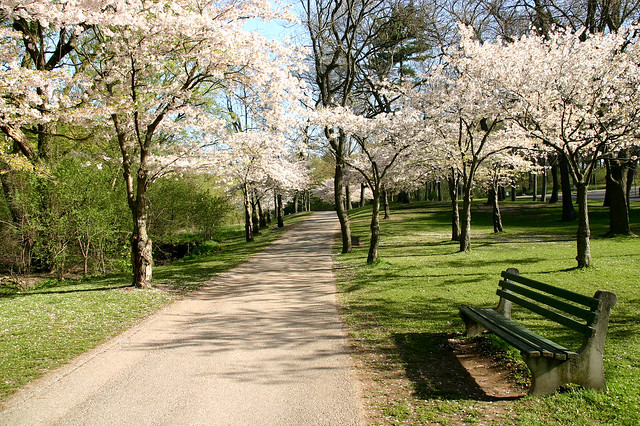 High Park is Toronto’s largest public parks which spread over 61 hectares of land. It is a recreational park with jogging tracks, hiking trails and open spaces for picnics. One-third of the park is a nature reserve home to a rare oak savannah ecology. High Park is the best place to be especially during the mild summers of Toronto. It’s also popular in spring due to the cherry blossoms!

The collection has shoes from China where women would bind their feet into small shoes along with Egyptian shoes. You’ll also find modern-day pairs worn by celebrities.

There are regular cultural programs and musical events that happen at the Aga Khan Museum. If you wish to learn about a different religion, Aga Khan Museum is certainly the right place to visit in Toronto.

Mountain biking is a very popular sport in Toronto! Though the cold winters in the city restrict mountain biking for quite some time, however, if you happen to visit Toronto during the non-winter months, you should definitely give it a shot! Toronto has more than 70 km of biking trails. 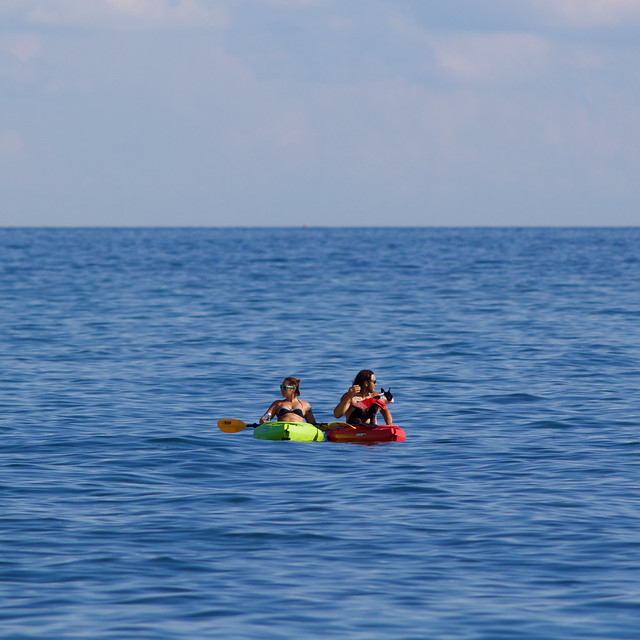 If you’re not up for mountain biking, the best alternative thing to do in Toronto would be kayaking. The Humber River in Toronto is easily accessible by public transport. The calm water of the river gives a perfect kayaking opportunity with the chance to spot turtles, egrets and even hawks. It is a perfect way to spend a nice and warm afternoon.

To get the best views in Toronto while stand-up paddling (SUP), I recommend going to Bluffers Beach. The water from the Bluffers Beach merges with Scarborough Bluff water, which gives the creamy dark blue color of the water. (The water at Bluffers Beach is usually very calm, so even beginners can try their hand at standup padding!)

Right in the heart of the city of Toronto are the Toronto Islands which made up of 15 small islands. Spend a nice day here picnicking, kayaking, biking, or boating. (It’s also possible to camp!) It is a perfect escape from the chaos of the city into nature.  The views of the CN Tower from here are stunning, so consider coming here to enjoy a sunset!

Anything else that you’d recommend doing in Toronto? Let us know your favorite thing to do in Toronto!

Rahma is an engineer by profession and a traveler by passion.
Her love for traveling across all the continents is slowly but passionately taking her to new places. She loves nature, adventure, and animals and that's what she seeks on all of her travels around the globe.

Previous Post: « The best museums in New York not to miss by a native New Yorker
Next Post: 12 beautiful churches and religious buildings in NYC by a New Yorker »